Stay a while, and listen.

Some say, she probably should have square eyes by present day. Some say, she should ”do more valuable things with her time” Some say, just because of the tired fact she was a girl – should be outraged and stay away from the industry. Luckily she didn’t listen.

A loooong time ago, a kid got to sit down by the computer with her father by his brand new IBM AT. She was introduced to the magnificent and spellbinding world of AllyCat in minty green, nightshade purple and black and white. The girl grew; learning there where many lives to be lived in endless adventures in countless worlds with no limits.

Some say, she probably should have square eyes by the present day. Some say, she should ”do more valuable things with her time” Some say, just because of the tired fact she was a girl – should be outraged and stay away from the industry. Luckily she didn’t listen.

I see myself as a gamer by heart. The games I’ve played are too many to be listed right away so the ones mentioned below are just a small taste. 🙂 I started out with AllyCat and Pac-Man – I remember being absolutely TERRIFIED of the spiders! Early I tried, (with different results due to language barriers) Hugo’s House of Horrors, Commander Keen, Leisure Suit Larry, and Hillsfar.

Then SCUMM was released and I got introduced to Maniac Mansion and Zak McKracken. The King’s Quest Series, Battle Chess, Monkey Island, Simon the sorcerer… King’s Quest V will always have a special place in my heart, for its spellbinding adventure. The actual battles during the matches in Battle Chess were fierce. And I’ve seldom laughed so hard as when playing Monkey Island and Simon the Sorcerer! ^^

In the early ’80s, mouse elbow and text neck wasn’t a particularly debated subject, and my parents where happy that I caught on the English language and immediately saw the pros with their daughter spending time by the computer. =)

In the early ’80s, mouse elbow and text neck wasn’t a particularly debated subject, and my parents were happy that I caught on the English language and immediately saw the pros with their daughter spending time by the computer. =)

When I wasn’t playing myself I often sat by my uncle when he took over the world in Sid Meier’s Colonization or advanced in Wolfenstein. We used to eat blueberry pie as he taught me the game back story. Good times.

My baby sister grew and I had a steady side-kick and co-op player in games like Whacky Wheels and The Treehouse. I remember her equal parts hiding and cheering me on all through Diablo 1! Whoever said gaming was unsocial just don’t get it.

Luckily for me, my best friend also had a PC early on. We sat in her parent’s workspace, put a blanket over the window and lost ourselves in Myst, Alone In the Dark and other horrors – just as often as we played Jill in The Jungle, Lost Vikings, Grim Fandango and Black & White. 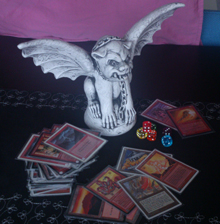 At this point, our parents subtly suggested that we should take a break from gaming once in a while, and conveniently I and she got introduced to Magic the Gathering. (Yes, the card game. I played an all red deck!)

Fortunately, we also got to try the occasional Super Mario, Yoshi’s Island and Chip’ n Dale Rescue Rangers at friends houses, but being kids remained true to whatever games were released to PC for a long period of time. Time had passed well into the 21st century when I finally bought my first console; my beloved Xbox 360 which later on lead to the Swedish launch date purchase of Xbox One.

Growing up with computers, it was only natural to choose an IT-oriented High School. For a period, I became a badass at Quake II, as I and my classmates came up with the brilliant idea to install pirated copies of the game on every school computer – and I even won a LAN tournament! 🙂

Nowadays some friends and I try to get together at least once a week, and depending on our mood kill each other for fun in StarCraft II or help each other out Elder Scrolls Online. Then there’s the sporadic hot-seat match in Heroes of Might and Magic – HOMM3, obviously! – and recently a recurred passion for getting together and playing board games and RPG’s like Dungeons and Dragons.

I constantly struggle with every gamers bitter-sweet dilemma: Too many good games – too little time.

Assassin’s Creed, Shadows of Mordor, Far Cry and Tomb Raider are all great games with captivating sceneries and interesting gameplay and motors. I would also be lying if I didn’t admit to enjoying the car chases, story, and humor in GTA V and WatchDogs 2 – even though there are tons of ethical discussions that could be held with those games in mind.

My favorites are still open world action adventure games, preferably RPG’s – Dragon Age series, Mass Effect, Fable series, Oblivion and Skyrim of course – and on top of that list is Fallout 3 in a fight with Fallout: New Vegas given the amazing scenery and story all throughout the game. I had no trouble at all putting in 400 hrs of gameplay to get all the achievements including Hardcore. 🙂 I spent roughly the same amount of time in the much-anticipated Fallout 4, and did the same again before finishing all the Gwent tournaments and achievements in Witcher 3.

Thimbleweed Park – EPIC for all Maniac Mansion fans! – and Hitman 2 which was cray-cray fun. Doing The Journey Down 1-3 in awesome old school click n’ play style that I backed on Kickstarter, and our Gothenburgian friends and partners over at Retroid released their Wunderling. Finished thw full story of Red Dead Redemption 2. Oh, after being an avid PC and Xbox gamer, I bought myself a Play Station 4 – played through Last of Us immediately in time for LoU2. Finally opening my home to Sony’s titles, I soon enough started working hard on checking off the God of War & Uncharted series on my AAA backlog. Let me not even get started on all the rest of great indie titles deserving time… I preordered both next gen consoles, and was lucky enough to get in on the early batches of the Xbox Series X and PlayStation 5 so with an upgraded TV the cold and dark Swedish winters are saved.

I constantly struggle with every gamers bitter-sweet dilemma: Too many good games – too little time. If you find yourself in the same situation, drop me a line. I know how you feel! See you around the internet! 😀

Yours Truly,
Paulina a.k.a. MsGamer

Proud gamer and geek. Digital native. Glass always half full. Get an almost unhealthy thrill from completing achievements - be it in game or IRL.
MsGamerSE on Twitter

The @SteamWorldGames will always have a special place in my heart! ❤️⛏️🤖 I remember vividly the team's hard work on Steam World Dig 2 (the first real title that features my name in the end credits 😉🙏) Much has happened since! I'm excited to see how SW Builder turns out 👏🌟 pic.twitter.com/JYz6UNkEtx